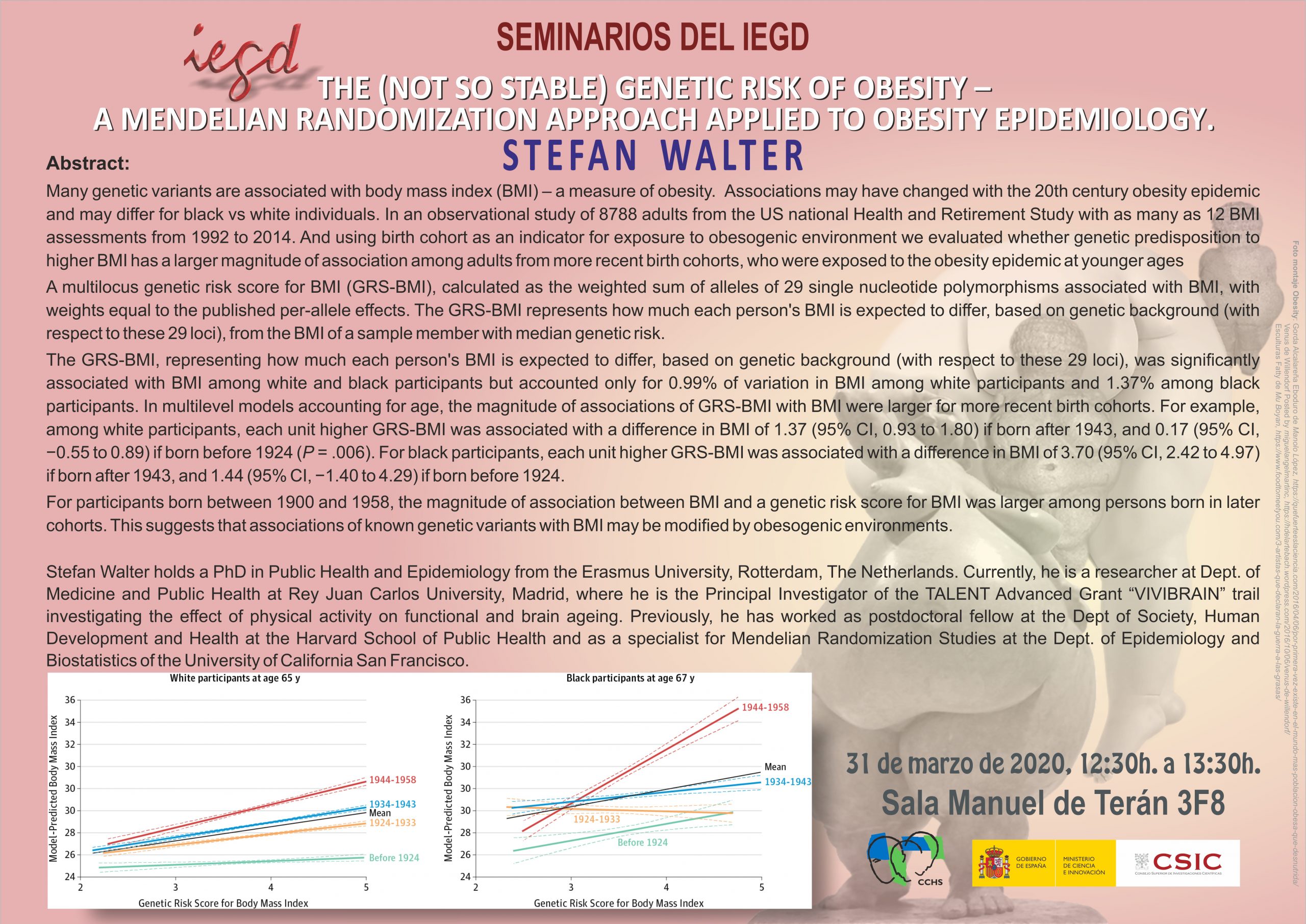 This event has been postponed.

Many genetic variants are associated with body mass index (BMI) – a measure of obesity.  Associations may have changed with the 20th century obesity epidemic and may differ for black vs white individuals. In an observational study of 8788 adults from the US national Health and Retirement Study with as many as 12 BMI assessments from 1992 to 2014. And using birth cohort as an indicator for exposure to obesogenic environment we evaluated whether genetic predisposition to higher BMI has a larger magnitude of association among adults from more recent birth cohorts, who were exposed to the obesity epidemic at younger ages

A multilocus genetic risk score for BMI (GRS-BMI), calculated as the weighted sum of alleles of 29 single nucleotide polymorphisms associated with BMI, with weights equal to the published per-allele effects. The GRS-BMI represents how much each person’s BMI is expected to differ, based on genetic background (with respect to these 29 loci), from the BMI of a sample member with median genetic risk.

For participants born between 1900 and 1958, the magnitude of association between BMI and a genetic risk score for BMI was larger among persons born in later cohorts. This suggests that associations of known genetic variants with BMI may be modified by obesogenic environments.

Stefan Walter holds a PhD in Public Health and Epidemiology from the Erasmus University, Rotterdam, The Netherlands. Currently, he is a researcher at Dept. of Medicine and Public Health at Rey Juan Carlos University, Madrid, where he is the Principal Investigator of the TALENT Advanced Grant “VIVIBRAIN” trail investigating the effect of physical activity on functional and brain ageing. Previously, he has worked as postdoctoral fellow at the Dept of Society, Human Development and Health at the Harvard School of Public Health and as a specialist for Mendelian Randomization Studies at the Dept. of Epidemiology and Biostatistics of the University of California San Francisco.

Any cookies that may not be particularly necessary for the website to function and is used specifically to collect user personal data via analytics and other embedded contents are termed as non-necessary cookies. It is mandatory to procure user consent prior to running these cookies on your website.