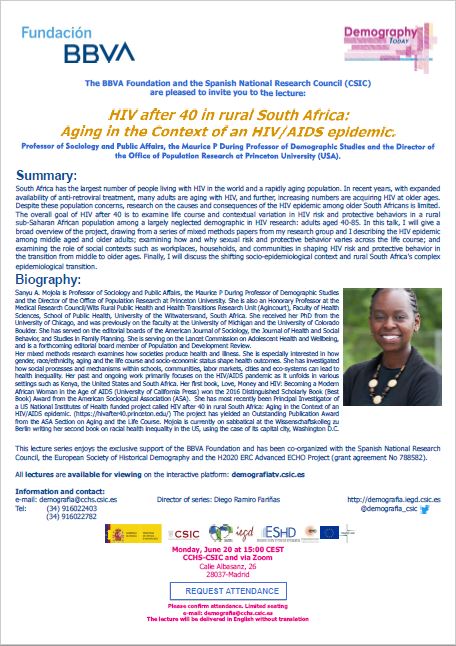 HIV after 40 in rural South Africa: Aging in the Context of an HIV/AIDS epidemic . Lecture, 20 June 2022

South Africa has the largest number of people living with HIV in the world and a rapidly aging population. In recent years, with expanded availability of anti-retroviral treatment, many adults are aging with HIV, and further, increasing numbers are acquiring HIV at older ages.

Despite these population concerns, research on the causes and consequences of the HIV epidemic among older South Africans is limited. The overall goal of HIV after 40 is to examine life course and contextual variation in HIV risk and protective behaviors in a rural sub-Saharan African population among a largely neglected demographic in HIV research: adults aged 40-85. In this talk, I will give a broad overview of the project, drawing from a series of mixed methods papers from my research group and I describing the HIV epidemic among middle aged and older adults; examining how and why sexual risk and protective behavior varies across the life course; and examining the role of social contexts such as workplaces, households, and communities in shaping HIV risk and protective behavior in the transition from middle to older ages. Finally, I will discuss the shifting socio-epidemiological context and rural South Africa’s complex epidemiological transition.

is Professor of Sociology and Public Affairs, the Maurice P During Professor of Demographic Studies and the Director of the Office of Population Research at Princeton University. She is also an Honorary Professor at the Medical Research Council/Wits Rural Public Health and Health Transitions Research Unit (Agincourt), Faculty of Health Sciences, School of Public Health, University of the Witwatersrand, South Africa. She received her PhD from the University of Chicago, and was previously on the faculty at the University of Michigan and the University of Colorado Boulder. She has served on the editorial boards of the American Journal of Sociology, the Journal of Health and Social Behavior, and Studies in Family Planning. She is serving on the Lancet Commission on Adolescent Health and Wellbeing, and is a forthcoming editorial board member of Population and Development Review.

Her mixed methods research examines how societies produce health and illness. She is especially interested in how gender, race/ethnicity, aging and the life course and socio economic status shape health outcomes. She has investigated how social processes and mechanisms within schools, communities, labor markets, cities and eco-systems can lead to health inequality. Her past and ongoing work primarily focuses on the HIV/AIDS pandemic as it unfolds in various settings such as Kenya, the United States and South Africa. Her first book, Love, Money and HIV: Becoming a Modern African Woman in the Age of AIDS (University of California Press) won the 2016 Distinguished Scholarly Book (Best Book) Award from the American Sociological Association (ASA). She has most recently been Principal Investigator of a US National Institutes of Health funded project called HIV after 40 in rural South Africa: Aging in the Context of an HIV/AIDS epidemic. (https://hivafter40.princeton.edu/) The project has yielded an Outstanding Publication Award from the ASA Section on Aging and the Life Course. Mojola is currently on sabbatical at the Wissenschaftskolleg zu Berlin writing her second book on racial health inequality in the US, using the case of its capital city, Washington D.C.